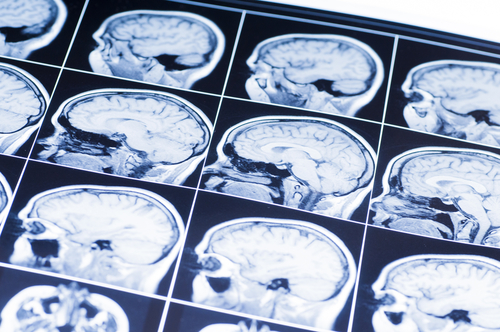 SS is a 58-year-old woman who had a history of anxiety and depression and severe gambling addiction. At the age of 54, she was hit by a car at a zebra crossing while walking to local shops and as a result suffered a severe traumatic brain injury. Her Glasgow Coma Scale (GCS) was very depressed at 6/15, and she had a protracted period of posttraumatic amnesia (PTA) of greater than 2 weeks. A CT scan showed bilateral small acute subdural hematomas and multiple contusions especially in both temporal lobes as well as fractures of the skull vault and base of the skull. She was treated conservatively in the hospital and discharged to a local rehabilitation unit where she demonstrated significant cognitive, emotional, and neurobehavioral problems. She refused interventions and was deemed to lack insight. She made gradual improvement though showed a lack of insight into her difficulties and lacked awareness of her neuropsychiatric problems and functional ability. She was discharged home and subsequently refused further carer or rehabilitation input.

When seen in clinic, SS denied experiencing any major problems with looking after herself. She also denied any difficulties with cooking or shopping. She admitted that at times, she could be forgetful though did not seem unduly worried about this. At the time, she was living with a boyfriend who she had met after her brain injury and she described a good relationship.

Collateral history provided by a family member indicated that SS had not gambled since the accident though she had had a go at the machines but “could not figure them out.” She had however, since the accident, come home with various men, something she had not done before. She had also shown inappropriate affection to a male carer, which led to the agency sending only female carers. However, these behaviours had somewhat improved over the years since the accident especially after she met her current partner. Her family member felt that she lacked motivation and drive though this was becoming better.

A phone call to her partner described her as someone who was “very distant” and experiencing mood swings regularly. She was said to be “very nasty” and then “alright” and could become aggressive “if you speak to her the wrong way.” He also highlighted that she suffered from significant lack of motivation and would “sit staring out of the window” if not prompted. He stated that her short-term memory was poor and she also had significant problems with long-term memory. He did not consider her to be depressed or anxious.

SS was employed and enjoyed a relatively stable married life until she was made redundant. She soon developed a depressive disorder and started to gamble. Her gambling progressively got out of hand as she was repeatedly in debt of large sums of money and got into disagreements with family members and her husband. Her family members had to intervene to pay off her excessive debts. She required care from local psychiatric services and received a variety of interventions for her mental health difficulties including various psychological interventions and psychiatric treatments like antidepressants, anxiolytic drugs, hypnotic drugs, and low-dose antipsychotic drugs. She also enrolled in Gambling Anonymous. She required a lot of input from primary care services as well as secondary care mental health services due to her problems. Her marriage eventually broke down due to her gambling problems and excessive debts.

There was no family history of epilepsy, psychiatric disorder, or degenerative disorder.

Mental state examination revealed a middle-aged woman who appeared older than her age. She appeared slightly unkempt and fatigued. She was subdued in mood and seemed rather unconcerned about her memory difficulties. Her answers to questions were short with many questions answered with “I don’t know.” She was alert, though not oriented to time. Her memory for events before the accident seemed somewhat impaired, and she seemed to have difficulty recalling events that had happened since the accident. It was noted that while she provided some answers, which seemed logical, many of these were found to be wrong. Neurological examination revealed loss of sense of smell.

A neuropsychology assessment was requested. Routine MRI showed changes compatible with her TBI.

Neuropsychology evaluation demonstrated significant acquired cognitive impairments in all areas of cognitive functioning including intellectual functioning, memory, attention and concentration, and executive functioning, with memory and working memory being particularly affected. It was also felt that SS demonstrated a complete lack of insight into the extent of her difficulties. It was felt that she would struggle to live independently and a rehabilitation program should be instituted.

It was also felt that there might be a degree of confabulation. The family views were that SS seemed to be much better since the accident as she stopped gambling and as she was not as disabled by depression and anxiety as before.

SS and her partner did not think that any rehabilitation was necessary and felt that they were managing generally well together. In particular, SS was not keen to engage with any intervention.

A diagnosis of an organic personality change/disorder following brain injury was made according to the ICD-10 diagnostic criteria. A diagnosis of a specific memory disorder was also considered due to impaired recent and remote memory as well as confabulation.

What Did I Learn from This Case?

Personality disorders are generally understood to cause significant problems to society in general, and most doctors will be familiar with the Phineas Gage case in which a brain injury led to severe impulsivity and aggression. However, this case shows that though a diagnosis of an organic personality change/disorder was made due to the significant changes from premorbid behavior, it does suggest that her personality change seemed to have been of some benefit.

Most professionals involved in SS’s case were of the opinion that she seemed to function better overall following her brain injury compared to pre-accident. She had stopped gambling, seemed to have settled into some form of routine with her new partner, and experienced less depression and anxiety. As a result, her dependence on the health service had markedly reduced, and it was felt that her overall level of disability was lower compared to pre-accident. She did, however, have significant cognitive impairments as a result of the brain injury.

Behavioral impairments following a brain injury can present as an increase, a decrease, or a dysregulation of behavior. This case showed a decrease in goaldirected behavior, which can occur on a continuum of severity ranging from mildly diminished motivation to akinetic mutism in severe cases. While behavioral problems following brain injury can be an obstacle to engaging in rehabilitation and need to be identified and treated, in some cases, the behavioral change can be of benefit, taking into account the premorbid personality of the particular patient.